Sold under license from AM Chemicals LLC for Research Use Only. An additional royalty fee of 8% will be added as a line item for the quoted/invoiced price of GalNAc component

GalNAc
A more directed approach to the delivery of therapeutic oligonucleotides specifically to the liver has been to target the asialoglycoprotein receptor (ASGPR) using a suitable glycoconjugate. Indeed, ASGPR is the ideal target for delivery of therapeutic oligonucleotides to the liver since it combines tissue specificity, high expression levels and rapid internalization and turnover. The use of oligonucleotide glycoconjugates has led to significant advances in therapeutic delivery as evidenced by the work of Alnylam Pharmaceuticals which has developed multivalent N-acetylgalactosamine (GalNAc) conjugated siRNAs that bind at nanomolar levels to ASGPR (1). A similar strategy has been applied at Ionis Pharmaceuticals directed at the development of antisense oligonucleotide therapeutics (2).
The GalNAc ligand originally used by Alnylam is the triantennary ligand would seem to lend itself to formation by post synthesis conjugation to the 3' terminus but a complex trivalent GalNAc support would also be perfectly applicable, if challenging to produce. However, an alternative approach using a monovalent GalNAc support with two additions of a monovalent GalNAc phosphoramidite was also described and yielded a trivalent GalNAc structure. This (1+1+1) trivalent GalNAc structure led to GalNAc modified siRNA oligos with potency equal to the equivalent siRNA with the triantennary GalNAc ligand both in vitro and in vivo.
Researchers at Ionis have developed antisense oligonucleotides containing the GalNAc cluster. In their case, they were able to show2 that moving the triantennary GalNAc ligand to the 5' terminus led to improved potency in vitro and in vivo. As may be expected, such a large complex ligand lends itself to solution phase chemistry to produce GalNAc modified antisense oligos. However, a solid phase synthetic approach was also described, and compared to the solution phase approach structure of the 5'-GalNAc triantennary ligand (4).
A further report on antisense oligonucleotides demonstrated (5) the effectiveness of modifying at the 5' terminus using monovalent GalNAc ligands. Up to five GalNAc monomers were added in a serial manner (Figure 3) and it was shown that activity of the antisense oligonucleotides improved as the number of GalNAc units increased. The authors also showed that phosphodiester linkages between the GalNAc units were preferable to phosphorothioate linkages in their testing (5). 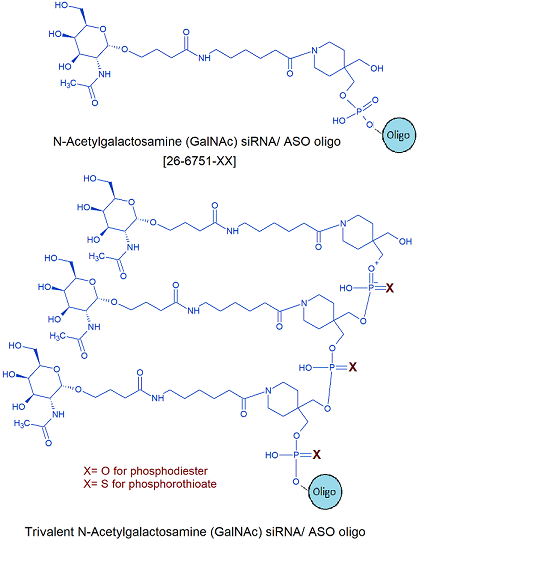 
alpha-tocopherol TEG Modification
alpha-tocopherol (vitamin E) is both lipophilic and non-toxic even at high doses so would be an excellent candidate as a lipophilic carrier for oligonucleotides. Similar to cholesterol TEG, the TEG liker arm facilitates solubility issues of the oligo making it soluble in aqueous buffers.

Stearyl Modification
Stearyl Modification is C18 lipid, it is an economical and effective carrier molecule. We envisage that the 5'-stearyl group will become a favored lipophilic carrier for experimentation with synthetic oligonucleotides.